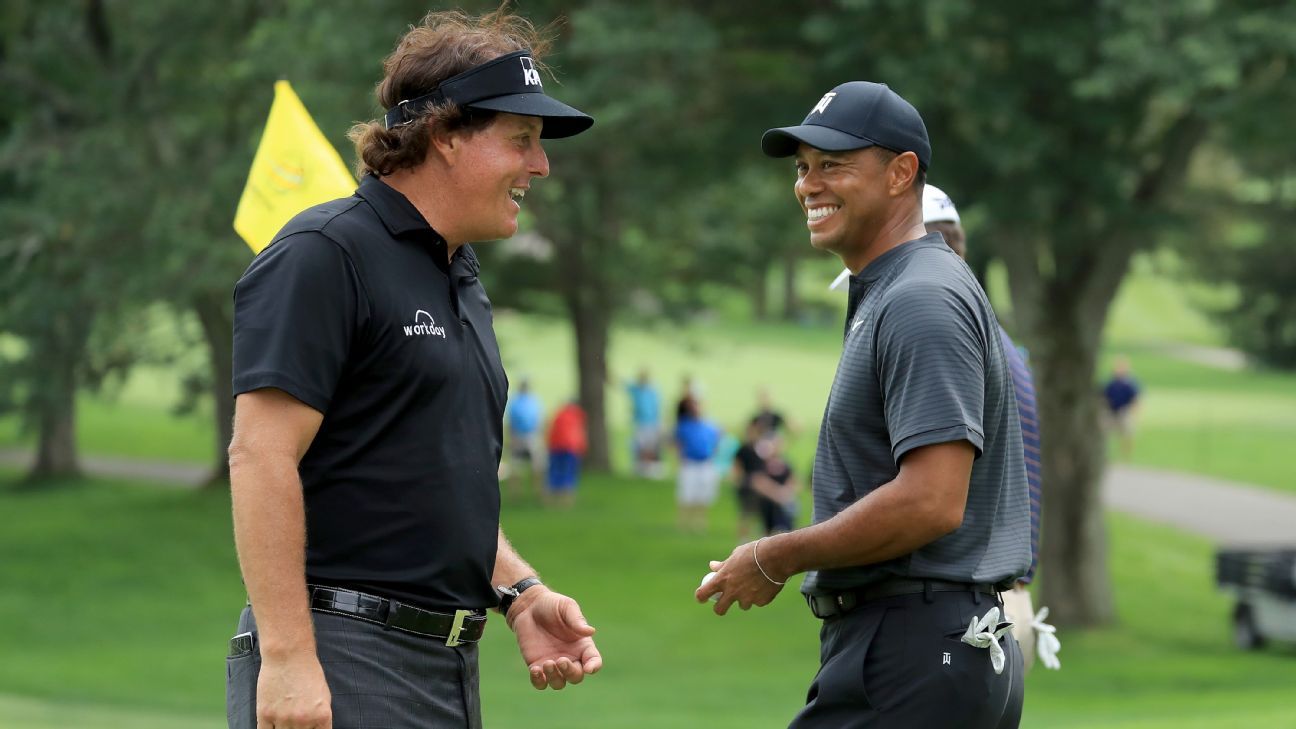 Phil Mickelson has already “baited” Tiger Woods into a $200,000 side bet as part of their winner-take-all $9-million match on Friday in Las Vegas.

During a news conference on Tuesday at Shadow Creek to promote “The Match” between the longtime golf rivals, Mickelson noted he’s been thinking about the side challenges that are to be part of the pay-per-view event.

“I feel like the first hole is a great hole for me,” Mickelson said. “And I believe — in fact I’m willing to risk $100,000 that says I birdie the first hole. So that’s how good I feel heading into this match.”

Mickelson made it clear to Woods that he didn’t have to accept, but the 14-time major champion said: “So you think you can make birdie on the first hole?

“I know I’m going to make birdie on the first hole,” Mickelson said.

And so there will immediately be something on the line Friday when 14-time major champion Woods, 42, and five-time major winner Mickelson, 48, step to the first tee at Shadow Creek, a 415-yard par-4.

Months in the making, the Tiger-Phil match is set to begin at 3 p.m. ET, with Woods favored to prevail but Mickelson relishing the opportunity to hold some bragging rights.

At times forced (they staged a boxing-like stare-down at the end, before both broke up in laughter), the news conference was equal bits banter, hype and back-slapping, as the long-ago adversaries have become far friendlier in recent years.

Mickelson quipped that Woods is six years younger than him “even though he doesn’t look it,” and then went on to summarize their careers.

“He came along and broke every single record I had,” Mickelson said. “Junior records, college. U.S. Amateur. I won one, he won 3. At Shadow Creek, I shot the course record 61. A couple of years later you shoot 60.

“But Friday you’ve got to do it simultaneously. You can’t come along and do it later. It’s my chance after losing so many tournaments to you, so many majors, to get something back.”

Mickelson was far more into the huckster mode, explaining that The Match has motivated him throughout a time when he would generally have put the clubs away.

“This is a unique opportunity to do something that I’ve had a hard time doing, which is to get a leg up on Tiger even if it’s just one day,” Mickelson said. “It’s great to win the $9-million but I just don’t want to lose to him. The bragging rights are the thing. I want to be able to rub it in; I don’t want it to be rubbed in. I want to sit in the Champions locker room at Augusta [National, home of the Masters] and talk smack.”

Sensing where Woods might go, Mickelson pointed out that there have been some moments for him, including the 2012 AT&T Pebble Beach Pro-am, where Mickelson shot a final-round 64 while paired with Woods, who shot 75. Mickelson won his 41st PGA Tour event at the time.

“I know you’re going to bring up the big picture [overall wins],” Mickelson said to Woods. “I have to pick my spots. I have to be careful. Friday is my chance to have some fun.”

Woods capped a successful season in September by winning the Tour Championship, his 80th PGA Tour title that was the culmination of a surprising comeback season after 2017 spinal fusion surgery. He is now ranked 13th in the world after starting the year at 656th.

Mickelson, who won the Mexico Championship in March for his first win in five years, is 27th in the world after beginning the year at 37th.

Woods said he “shut it down for three or four weeks” following the Ryder Cup before resuming golf activity. “I’ve been getting back practicing and playing and grinding and playing golf again,” he said. “It’s been fun. “Gets my juices flowing again.”

The winner of the event is to receive $9-million, with nothing going to the loser – although both players have partnered through their various representatives to stage the event, thus in theory profiting and with hopes of it leading to similar exhibitions with other players.

The side bets are supposed to be from the players’ own funds, with those proceeds going to charity.

After they settled on the first-hole bet, Mickelson said: “Did you see how I baited him like that? Yes. $200(,000) says I birdie the first hole.”