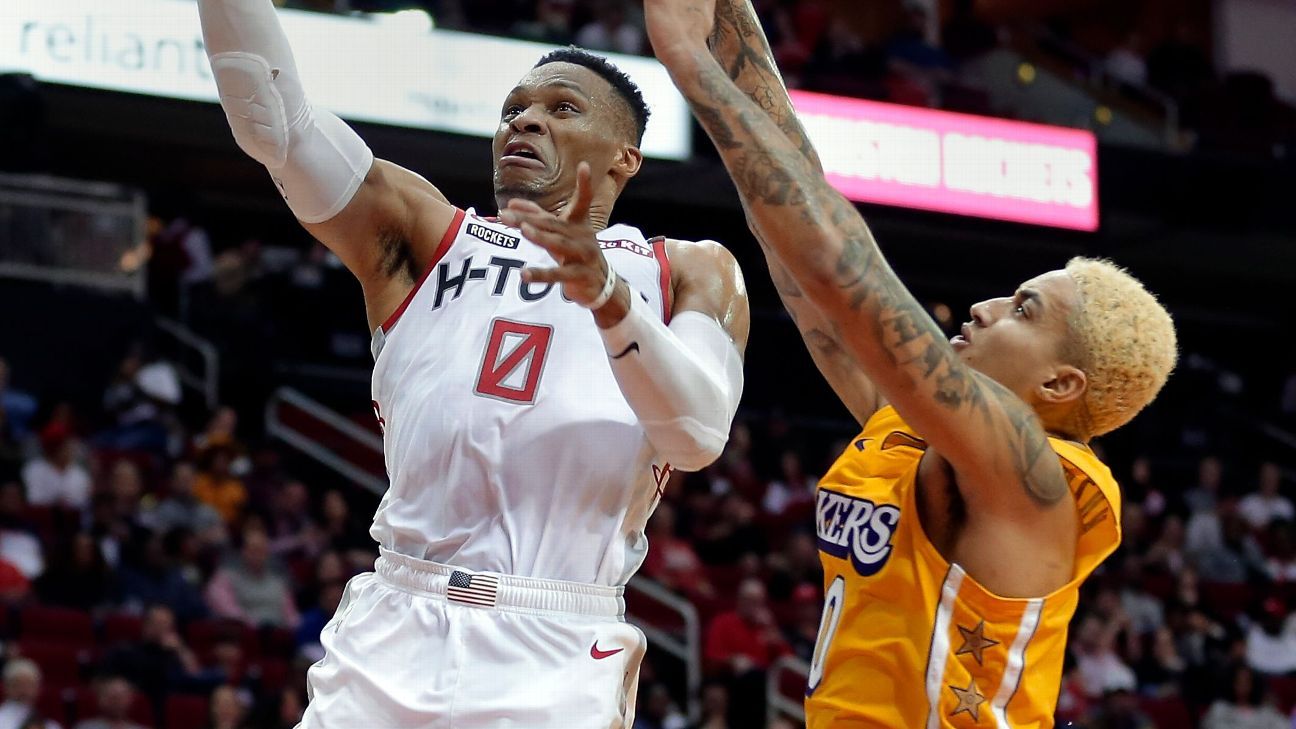 HOUSTON — It was halftime in Houston. The Rockets led by six, and Russell Westbrook was rolling, already up to 22 points on 9-of-12 shooting, when Los Angeles Lakers guard Rajon Rondo made a coaching suggestion.

Why not try putting Kyle Kuzma on him?

Kuzma, known more for his scoring potency than his penchant for defense, took on the assignment admirably, as Westbrook was limited to 13 points in the second half of L.A.’s 124-115 win.

“Hey, I had to contribute somehow,” Rondo, who missed his second straight game with a fractured right ring finger, told ESPN afterward.

“Rondo kind of pulled me to the side at halftime in the locker room and just asked me if I could guard him, and I said, ‘Of course,'” Kuzma said. “Westbrook was really hurting us in the first half, posting up our guards, and he’s just tough, he’s a tough load. He’s a big, strong, physical guard. In the second half, that kind of got eliminated, putting a bigger body on him.”

Kuzma was asked to detail his defensive game plan against the former MVP.

“Just keep him in front,” he said. “I’m confident in myself defensively. Just try to keep him in front, take tough shots and just not foul. These guys, they look for fouls. And if you keep them off the line, it bodes pretty well for you.”

Westbrook attempted only three free throws in the second half after six trips to the line through the first two quarters.

Meanwhile, Kuzma’s offense also took off. He had 17 of his 23 points after halftime, finishing an efficient 8-for-16 from the floor while getting the start in place of Anthony Davis, who missed his fifth straight game with a bruised backside.

“A lot changed in the third quarter, but most importantly, Kuz switched off on Russ and just made it tough on Russ,” said LeBron James. “Russ is incredible when he gets on the break and his ability to finish, his ability to play at a fast pace, his athletic ability, but Kuz just kept his body in front of him, made him take tough shots. He made a couple, but Kuz made it tough on him, so that helped changed the game for us.”

It was the Lakers’ first test against Houston — considered a title contender coming into the season — and a strong showing, especially with Davis out.

Kuzma had an injury scare himself, turning his left ankle in the second half — the same ankle he hurt during USA Basketball tryouts in the summertime and which has already caused him to miss time this season.

“I just went back and taped it up,” he said. “I wanted to get back out there with my teammates. Start the road trip off right. Get a win. It obviously hurt a little bit. Stuck through it.”

Kuzma, whose name has popped up in trade rumors in recent weeks as L.A.’s most pliable young asset on a cost-friendly contract, has stuck to trying to make the most of his increased role with Davis out despite the uncertainty of his future with the Lakers.

“Kuz is very young, and all of us, we’re experienced veterans, we’re going to continue to teach him,” Howard said. “He’s doing an amazing job. I’m real proud of him.”

The third-year forward said he’s listening to his more experienced teammates for tips on the defensive end of the floor.

“Just being around these veterans kind of inspire me to add to my game,” Kuzma said. “I want to be on the floor. And if I’m going to get on the floor, I got to play defense. I’ve just done a good job, and I’m confident in myself defensively now.”

“I think he understands what the bigger picture is,” Green said. “It’s not about scoring, not about getting numbers, it’s not about ‘getting mine’ on the offensive side of the floor. It starts with the defensive end of the floor.

“Obviously, he can still do it on the offensively, but defensively, he knows you can’t have any lapses. You can’t have any letdowns. … We don’t want to let our teammates down, basically. We don’t need anybody that’s a mismatch. We don’t need anybody that’s a liability. The biggest thing, for him, is not just not being a liability, but also letting people know and taking his game to the next level by showing that he can be a defensive presence for us.”

He certainly was that — for a half, anyway — on Saturday.