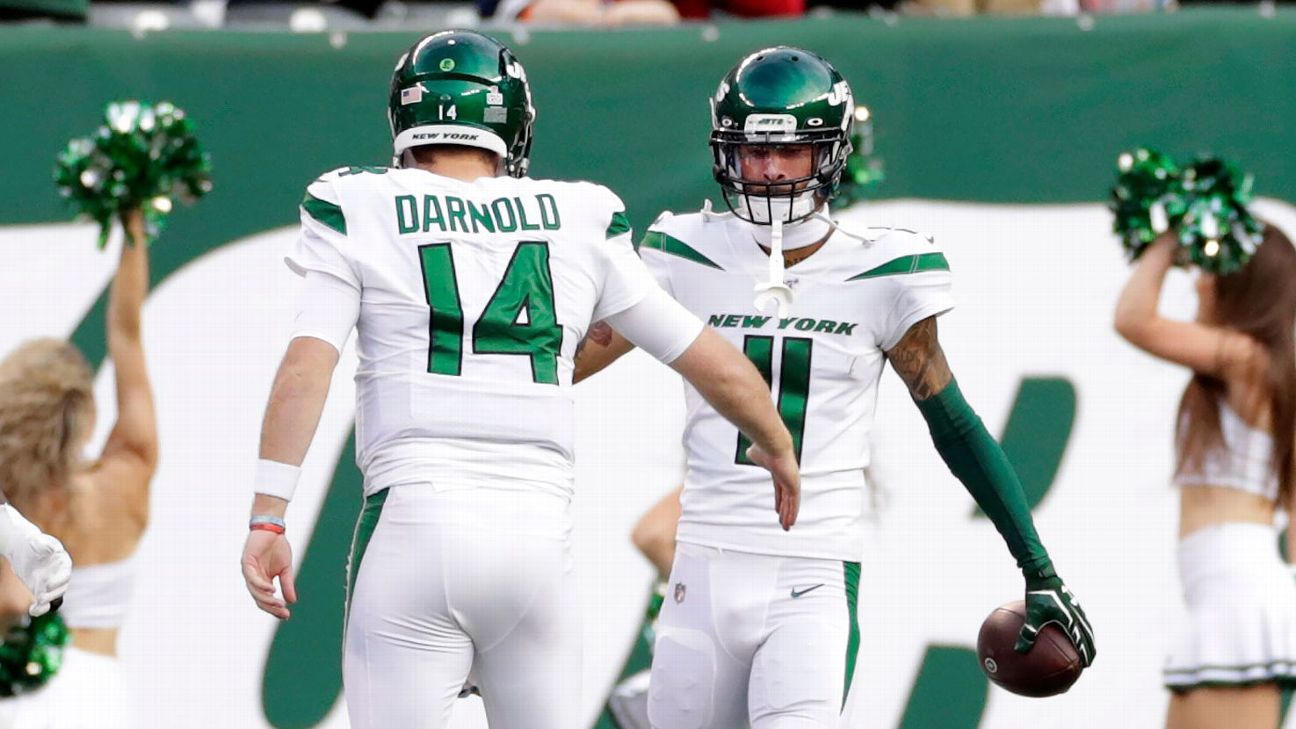 Speaking to reporters last month at the scouting combine, New York Jets general manager Joe Douglas was asked the importance of surrounding quarterback Sam Darnold with explosive playmakers. He mentioned the Super Bowl and how the Kansas City Chiefs and San Francisco 49ers were loaded with them.

He just let his best one get away.

What you need to know about the New York Jets:

Wide receiver Robby Anderson, who has caught more touchdowns from Darnold than any other player, agreed Tuesday to a two-year, $20 million contract with the Carolina Panthers, a source told ESPN NFL Insider Adam Schefter. Anderson will be reunited with his former coach at Temple, Matt Rhule, which might have been the deciding factor in his decision. Clearly, the Jets, who saw Anderson as a $10 million-a-year receiver, didn’t want to extend themselves.

Douglas is running a tight ship in his first offseason, evidenced by the handful of low-cost additions. By refusing to bend on Anderson, he puts the pressure on himself to find an adequate replacement. The offense can’t function with its current cast of receivers. They have the dependable Jamison Crowder in the slot, but their most accomplished outside receiver is Quincy Enunwa — and his future is murky because of a neck injury.

Time to panic? Not yet. It’s still only March, but they will be doing a great disservice to Darnold if they fail to supply him with a couple of weapons.

The first thing they need to do is acquire a veteran presence on the outside. Free agent Breshad Perriman is an Anderson-type, a vertical threat who can stretch a defense. He hasn’t lived up to his first-round draft status, but he finished last season with 507 receiving yards over the final five weeks for the Tampa Bay Buccaneers — the third-highest total in the league over that that span. He’d come cheaper than Anderson.

Alshon Jeffery‘s name is sure to come up in speculation because of his past with coach Adam Gase — they were together with the Chicago Bears — but he would be a stretch at this point. Jeffery, 30, is coming off a bad year and foot surgery, and might not be ready until September. And, oh yes, he’s currently under contract to the Philadelphia Eagles.

There’s always the draft. No doubt, this factored heavily in Douglas’ decision to let Anderson walk. Experts are calling this the most talent-rich receiver draft in more than a decade. The top two prospects are Alabama’s Jerry Jeudy and Oklahoma’s CeeDee Lamb and, if you believe the mock drafts, both could be available to the Jets with the 11th pick.

Problem is, the Jets have so many other needs. Receiver just climbed a notch or two on the list. If Douglas doesn’t take Jeudy or Lamb, he has to come away with a receiver in the second or third round. Some talent evaluators believe there could be as many as 20 chosen in the first three rounds. The Jets have rotten luck when it comes to drafting receivers; the last one to record a 1,000-yard season was Jerricho Cotchery — a fourth-round pick in 2004.

Douglas isn’t lugging any baggage because this will be his first draft as the Jets’ football czar. There will be a lot of firsts for him, as in: Not re-signing Anderson is the first personnel decision that will be highly scrutinized.

The Jets saw Anderson as a talented, but limited player whose off-the-field history caused them some agita. In a depressed receiver market, they refused to exceed their price point. They finished 32nd in total offense with Anderson, so they can live without him.

But only if they find another weapon. If not, they will ruin their young quarterback.